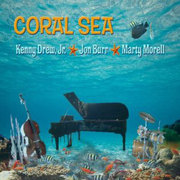 The spirit of Bill Evans is a strong presence throughout this set. Coral Sea includes a composition by Evans himself (“Very Early”), one by bassist Scott LaFaro that Evans adapted into his repertoire early on (“Gloria’s Step”), and at least one more (the late Dave Brubeck’s “In Your Own Sweet Way”) that was closely associated with him. In addition, leader-pianist Kenny Drew Jr. contributes an Evans tribute (“This One’s for Bill”), and drummer Marty Morell, a fixture with Evans between the late ’60s and mid-’70s, is on hand to provide those familiar, gently shifting textures and rhythmic intertwinings with piano and bass associated with the classic Evans sound.

That being said, Drew manages to plant his personal stamp on most of what’s here. Where Evans luxuriated in chords as if they were meditation pools, Drew uses them as percussion as well as shadings. Even on misty dreamscapes like “Very Early” and “This One’s for Bill,” he summons a feel of well defined purpose. His touch is more forceful than Evans’ usually was; he emphasizes each note’s contour, revealing the attack/release pattern as a voice in and of itself. Burr’s bass work is spiced with an astringent sweet-sour flirtation with pitch, adding to the tension, and when Drew juxtaposes quick-fingered countervailing rhythmic patterns against his own lines as well as the others’, things ramp up even more.

The trio’s sprightly reading of Monk’s “Rhythm-a-Ning” perks up the proceedings, while their Latin-textured impetus on Ellington’s “My Love,” Clare Fischer’s “Minor Sights,” parts of the title song, and the Jobim ballad “Someone to Light Up My Life” melds propulsion and introspection with unselfconscious ease. In fact, that isn’t a bad way to describe this entire outing.

This site uses Akismet to reduce spam. Learn how your comment data is processed.